Neon Genesis Evangelion was the first anime I owned in hard copy in the form of DVDs which I had scrounged and saved to buy, a few years after entering the workforce. So naturally the Evangelion series holds special meaning for me. Directed by Anno Hideaki, this iconic mecha anime first aired in 1995 in Japan. It has since seen a reboot through a series of movies i.e. Evangelion: 1.0 You Are (Not) Alone [1997]; Evangelion: 2.0 You Can (Not) Advance [2009]; Evangelion: 3.0 You Can (Not) Redo [2012]; and Evangelion: 3.0 + 1.0 [eta 2020]. It took me long enough but I finally got my hands on some Evangelion scale model kits and resin figurines to add to my project pipeline.

As my personal hobby convention would dictate, wherever possible each project universe should comprise a scale model (mecha/vehicle) and figurine kit. Sometimes it's only possible to find either one or the other and not both. So far I've been lucky as two other sci-fi anime universes included in my project pipeline had both (check out the third- and second-last photos below).


Both the EVA-00 Prototype (Yellow) and EVA-01 Test Type model kits were chosen for a specific reason. In Episode 6: Showdown in Tokyo-3 of the original series, there was a scene in which EVA-00 holds up a shield to protect EVA-01 from a Fifth Angel attack as the latter was preparing to take another sniper shot at the angel. It's a cool scene I would love to recreate in a diorama, if I can find miniature trees in the correct scale. If not, I'll just pose them together sans a diorama setting. As for the figurine, my first from this universe will be Rei Ayanami who is the EVA-00 pilot.


Back in the 90s when I first got into anime in a big way, there weren't many shows which held my interest. For a show to interest me then it had to have two things going for it. A great storyline and excellent animation. The latter characteristic was harder to come by in an age when digital animation technology wasn't the norm like it is today. So back then what caught my eye was work by directors like Anno Hedeaki (Neon Genesis Evangelion), Watanabe Shinichirō (Cowboy Beebop), Oshii Mamoru (Ghost in the Shell) and the great Miyazaki Hayao (My Neighbor Totoro, etc.). And my first anime series was of course Anno's 26 episode Evangelion which debuted in 1995.


Aside from the DVDs which I have carefully kept in pristine condition (see above), other Evangelion keepsakes included Gashapon or capsule toys I was collecting at a time when I was introducing my then young son to anime. (Incidentally it was then, sometime in the last decade, when I dropped the "excellent animation" requirement and just chose to enjoy any anime with a good storyline with him.) Gashapon, they are dispensed from vending machines in a random fashion so that you are never sure of what you will get apart from a limited range of products that is specified. What I remember is being extremely lucky in that I got Rei, Asuka and Shinji (see below) almost on my first try.


Also in my collection is a recent addition i.e. an artbook titled Evangelion Illustrations 2007-2017 (see below) published just last month by VIZ Media. This artbook showcases illustrations featuring characters from the series that was used on bullet trains, CD covers, film posters, etc. Here's a bit of trivia: when I first saw the characters drinking UCC Coffee I had no idea that it would eventually become my favourite brand of coffee. Now I drink up to three cups of the stuff everyday.


As mentioned above, there are actually two other E2046 resin cast figurines (see below) in my project pipeline, and it's highly likely that either one would precede Rei Ayanami on the airbrush turntable.


Before starting work on any new figurine, I have to first finish painting the Race Queen. She is coming along nicely and should be the next hobby project to be completed. After that I will decide on who next to paint ... either Sayla Mass from the Mobile Suit Gundam universe, Yurisha Iscandar from the Space Battleship Yamato 2199 universe or Rei Ayanami from the Evangelion universe. 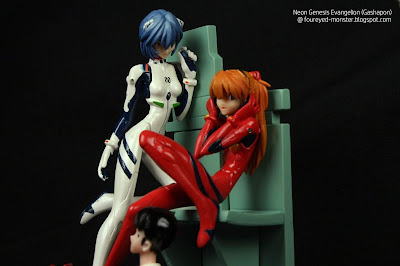 So that's that. A new sci-fi universe has entered my project pipeline. Neon Genesis Evangelion it is.

Posted by FourEyedMonster at 20:37 13 comments:

Slightly over a year after work began on a scale model recreation of Tank 124 of Pz.Abt. 505 circa September 1944 in Poland, the journey is now complete. In this recreation, a 1/35 scale plastic model kit with zimmerit decal as well as photo-etch metal accessory parts by Meng Model was used.


To paint and weather the King Tiger, I had to use a wide variety of materials. These consisted of lacquer, acrylic and oil paints as well as pastels, enamels and pigment weathering products. At the very least, by working on an armored fighting vehicle (AFV) project one will expose oneself to many different hobby techniques. Techniques that will certainly come in handy in the future.


Prior to final assembly, I touched up the face one of the tank crews (figurine that is pointing to the distance). My aim was to lighten the shadow near the bridge of his nose as well as improve the eyes. I succeeded in fixing his left eye which was the most problematic but totally forgot to fix his right eye whereby some of the whites of his pupil had leaked onto the eye lining below. But because this imperfection isn't really visible to the naked eye, I've decided to leave it as it is for the moment.


A Meng Model scale model kit is arguably best attempted by a modeller with an intermediate to advanced skill set. But this particular King Tiger is one of Meng Model's easier kits, with a lower than usual part count compared to their other kits. So although the King Tiger is only my second AFV project, the aforementioned fact plus my previous experiences with Bandai Star Wars kits meant that the journey I took with this AFV scale model kit wasn't as painful as it could've been.


Painting little details comprising the tank's pioneer tools and other tiny parts on the hull provided a sense of comforting familiarity for me as I was more used to working with miniature figurines and their accessories. In that respect, the same went for both the tank crew. Unsurprisingly these were the bits that I completed quickly versus the significantly slower pace for the rest of the tank.


Below are shots of the King Tiger (Henschel Turret) sans her crew from an isometric viewpoint. It gives a better view of the tank tracks, upper hull and turret top.


After the trails and tribulations of a moderately difficult scale model kit, I believe my next AFV project should revert to a simpler and quicker build. However, this'll be balanced by a more difficult painting process that involves learning a new airbrushing technique i.e. color modulation. All I know at this stage is that I would like to work on a German AFV that saw action on the Eastern Front during World War II. Something much smaller than a heavy tank. Until the reveal, I would like to thank my dear readers for having patiently followed the progress of this lengthy project. Thank you!

Posted by FourEyedMonster at 09:06 16 comments: