Following the completion of my Empire Strikes Back version of the Bandai 1/72 scale TIE Fighter, work resumed on the 1/144 scale Millennium Falcon. Work-in-progress up to this latest stage has seen paints and decal applied on the cockpit and two forward mandibles sans final weathering.


For ease of handling particularly when applying decals and washes/panel lining, I decided to work on the separate individual parts of the forward mandibles before assembling everything together. It's important to note that doing it this way will likely lead to a higher amount of spray paints being used as well as run the risk of damaging either some of the fragile parts and/or the paint work/decals.


An example of the attention to detail that Bandai has showered on its Star Wars model kits can be seen on the Falcon's equipment access bays and the sides of the forward mandibles. That the former comprised three-layered sections while the latter had additional tiny piping, etc. glued to it meant the parts projected depth before any wash was even applied. And after a combination of a dark grey and sepia wash, applied one after the other, the results looked great. Brilliant design by Team Bandai!


Undoubtedly, the pace slowed from working on the forward mandibles in their separate constituents. Putting it all together before painting may have been faster but I highly doubt the results would've been as good, especially for the equipment access bays. Those bays were too deeply recessed - due to their three-section structure - for paint to adequately reach the lower regions via spray paint.


As I alluded to earlier, my main worry in adopting this order of doing things (i.e. paint individual parts before assembly) is damage to the paint work as well as fragile side parts of the forward mandibles. Sadly I did snap a few of the side part's tubing/piping. But on the whole, the paint/decals/parts (which had a final matte clear coat on it) were fairly resilient to semi-rough handling. And the level of control I had while painting/decaling the individual parts made the few snapped parts well worth it. Moreover the broken parts were easily glued back together with Mr.Hobby's extra thin glue.


Soon I'll be starting on a new shorter-term Bandai Star Wars project to complement work on the Millennium Falcon. In addition, I also plan to resume normal service for my long neglected miniature figurine painting projects. Just which model kit/figurine is the million-dollar-question. And there's that nagging feeling urging me to pick up a pencil and draw, like an itch that won't go away. Well, it's time to calm the mind and choose ... errr ..... uhm ... ahhh ... I'll have to get back to you on that.

Posted by FourEyedMonster at 08:33 20 comments:

After a long drawn-out process, the Bandai 1/72 scale TIE Fighter is finally done. While this is a kit that could've easily been finished in a few days without any painting, it would've been remiss of me to not put in the tender loving care that this model kit deserves. Moreover, the TIE Fighter is my favourite spacefaring vehicle in the Star Wars universe, with the Star Destroyer close behind.


I've been thoroughly impressed by this Star Wars model plastic kit. The amount of detail Bandai has molded and the ease in which the parts all come together have made this a fun project while retaining a high possibility of achieving a good end result regardless of the painter's or modeller's skill level.


A simple yet effective inclusion to the model kit is the green laser shots. When positioned correctly to catch light at just the right angle, the two clear plastic parts do indeed resemble laser shots. However, they look like the sad, static plastic pieces they are if the light doesn't illuminate them properly.


If there is one gripe I have of the model kit is that the decals are extremely small. It takes a lot of patience and a steady hand to get good results with the tiny decals ... something that doesn't come easy to an antsy coffee slugging miniature painter/modeller like myself. But even so, I do have to admit the details on the decals is truly remarkable. So good that it will make or break your final piece.


Perhaps one thing I should have done differently was to apply dark grey liners on the Death Star base instead of the pure black I used. It's also the one thing that bugs me to no end. So much so that I was tempted to take shots of the TIE Fighter alone without the base such as the one you see immediately below this paragraph. Ah well, lesson learned. Next base won't have such harsh panel lines.


For a less distracting view of the TIE Fighter, I took some pictures of it without the green laser shots. 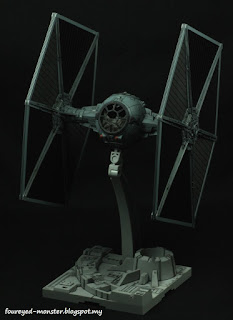 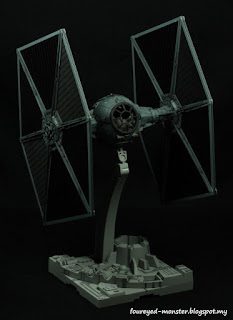 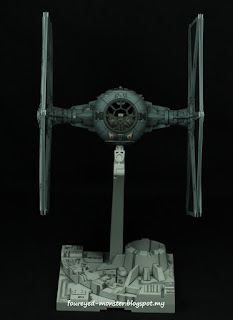 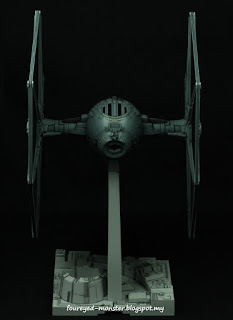 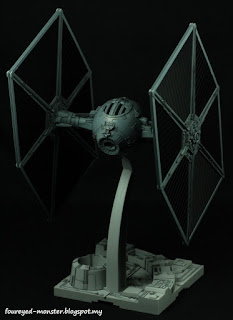 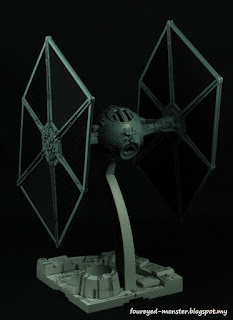 I love this TIE Fighter kit so much that I plan to do another version i.e. the light grey one from A New Hope. That project is in hiatus as I still can't get hold of a specific light grey colour I need. In a worse case scenario, I might be tempted to just use the primer as my base colour (that's the lightest gray I have in a spray can at the moment) and seal it with a clear coat. This isn't an ideal solution though.


In the meantime, I guess there is always another Bandai Star Wars model kit I can work on, or I could start painting figurines again. If I can find the time I want to do both. But then I also want to draw and meet some self-imposed writing deadlines. So much to do but so little time. Damn you mortality!

Posted by FourEyedMonster at 21:41 20 comments:

Work on the Bandai 1/72 scale TIE Fighter is on the final stretch now with the completion of its solar array wings and the Death Star base it stands on. The TIE Fighter's wings colour scheme mirrored that of its command pod with the solar array itself painted a matte black. Although I toyed with the idea of dry-brushing the solar array with various metallic paints, the amount of work involved meant I ended up leaving it at matte black. Such gargantuan efforts are best left to larger scaled models.


Initially I had wanted to leave the wings and base 'clean' i.e. without adding a black wash/panel lining to both. In the end going without was never a viable option because the parts looked 'off' and lacked depth without application of the black wash/panel lining. So out came the Tamiya Panel Line Accent Color as well as cotton buds and enamel paint thinner to clean the excess black enamel paint/wash.


While a pure black wash/lining works for the wings due to its darker blue grey colour, it looks too dark for the lighter neutral grey base. I should've used the 2:1 black to grey Tamiya Panel Line Accent Color mixture, which I had prepared for the Millennium Falcon, on the base. But it's too late now.


So the stage is now set for my final reveal of the TIE Fighter, Empire Strikes Back style. Only two minor things left to assemble, namely the clear green laser shots and display stand. Soon, one of the finest fighters of the Imperial fleet will be ready to take down some rebel scum! ^_^

Posted by FourEyedMonster at 23:53 12 comments:

A major step towards the completion of an Empire Strikes Back version of the TIE Fighter has been taken with various parts of the command pod/wing pylon finally assembled together. While this Bandai model kit may look acceptable assembled straight-out-of-the-box, it needs - in my humble opinion - to be pasted with water decals and painted in order to achieve its full potential.


Putting everything together was a bit of a risk seeing that the separate parts had paints and delicate decals on them. I was counting on the final matte coat to provide a measure of protection against the manhandling involved during the assembly process. In fact, my deepest fears were realised when I encountered difficulty putting some of the parts together seamlessly. So much so that I had to take a few swings at the problematic parts with a small mallet. Thankfully no paint chipping occurred. My guess is primer/paint must've gotten into the joints thus preventing them from snap-fitting easily.


I didn't realise it at the time but the 'kitbash decal' and paint job I put together for the TIE Fighter's upper access hatch looks identical to that of the original movie studio model kit of Darth Vader's Advanced TIE Fighter. It's a weird validation of sorts knowing that my design tastes is similar to that of a Industrial Light and Magic modeller. Cool! Anyway, enough of this patting-myself-on-the-back business. The reason why I decided to cut out parts of the decal to use instead of using the whole piece was because the latter option felt wrong somehow. Truth be told, I'm surprised I managed to get the tiny cutout decals to work at all. A very sharp knife and loads of luck got it done in the end.


Meanwhile, my 'fubar' moment arrived promptly to bring me back down to earth. Only after painting the TIE Fighter's power/fuel/laser system in considerable detail did I realise a fuel tank cap was going to cover it all up. Duh! Face Palm! Heck, double face palm! So all that hard work and fairly good results (there I go again with the back patting) has gone to waste. Well, sort off. The cap comes off easily with a twist so the TIE Fighter's bottom innards can still be made visible, if the need arises.


Working on this model kit has increased my appreciation of the TIE Fighter's beauty by leaps and bounds. Definitely helped by the plastic kit's impressive details and equally impressive decals to enhance those details. All she needs now are her wings and base. Those she'll have soon enough. Before that happens though the weekend will be upon us, and here's wishing you have a good one.

Posted by FourEyedMonster at 08:17 19 comments: