Working with metal miniatures for the first time has been anything but a pleasant experience. I found it extremely difficult to glue the small minuscule weapon pieces to the Chaos Obliterator's arms. At times it felt like a hair-pulling exercise in frustration. Thankfully most metal miniatures are being slowly replaced by Game Workshop's Citadel Finecast. Nonetheless, it was good to work on the Chaos Black Legion army again having neglected my Chaos army for quite some time ... even if it was just to assemble and undercoat the model.

With some modifications - most likely in the choice of colours - to the cool painting tutorial at Glued My Fingers, I hope to get both Obliterators painted as soon as possible, in between work on the Ultramarines and Orks.

Based on advice by bloggers such as limp, vuel, snake88 and ron, I decided to alter the white painting process slightly to improve the smoothness of the whites and reduce chalkiness. Using Astronomican Grey as the basecoat, then washing it with Badab Black before painting Skull White in a couple of thin and watered down layers resulted in better looking whites.

There is room for improvement, but that's solely due to my lack of skill. With three more Ultramarine Terminators to paint, I won't be short of practice so hopefully I will get better at painting the whites.


Progress on the Orks

Only managed to basecoat three out of the five Ork Nobz I have assembled from the Assault on Black Reach (AoBR) set and that's simply not good enough. With free time at a premium, I have to somehow find a more efficient way to paint up my son's Ork army faster. Short of 'sleep-painting' (heh heh ... wouldn't that be a sight for sore eyes), I am hoping experience will equal faster painting.

Outside of the AoBR Orks, I have 5 Ork Burnas and 5 Ork Lootas being lined up for assembly. Budget constraints seem to be turning the emerging Ork army to an infantry heavy one. Oh well, unless our local hobby stores start accepting Ork Teeth as payment, I guess it will have to do until more moolah comes my way.

Posted by FourEyedMonster at 11:48 5 comments:

Being short-sighted can be tough on the old eyes, especially when trying to paint miniatures. In addition to a lamp, I have found the magnifier to be yet another indispensable tool in a miniature painter's arsenal. While many painters can comfortably paint without the need for a magnifier, the use of one - in my case anyway - has greatly reduced eye strain. Nowadays, I rarely paint without it.

Having used the magnifier for more than four months now, I wholeheartedly recommend using one, especially when more often than not, you find yourself placing the miniatures close to your eye to get at fine details. With the magnifier, you can keep the miniature at arms length and reduce eye strain.

Manufactured by Pro'sKit Tools, the foldable magnifier was one of the cheaper versions available. While I did contemplate buying a head-mounted one with switchable lenses, I finally decided against it as those were retailing for double to triple the price. 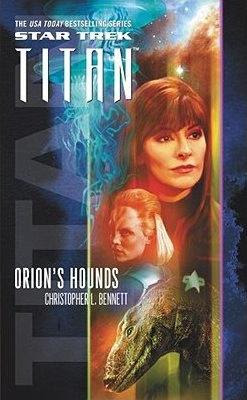 Not being a big fan of Star Trek characters like Captain Riker and Deanna Troi, I was a bit hesitant to read the Titan series, and ultimately decided to do so only because I am a completist when reading books. But that being said, the story lines in the three Titan books I have read so far have been rather good. Trek Trivia: An interesting angle to the Orion's Hounds book is that it deals with the alien encountered by the Enterprise in the first episode of Star Trek: The Next Generation.
Posted by FourEyedMonster at 13:02 6 comments:

It has taken a long time but I have finally finished painting a miniature from the Assault on Black Reach (AoBR) set. While better late than never, I do have mixed feelings with the end result.


I was reasonably happy with how the blue armour turned out, but I kinda messed up the whites. Based on the pictures shown in the AoBR manual, the Games Workshop team painted such smooth looking whites. One reason could be that I did not follow the advice given in White Dwarf No.359 which suggested layers of a mixture of Space Wolves Grey and Graveyard Earth before ending with pure Skull White. As I am in a hurry to paint as quickly as I can (before AoBR becomes yesterday's starter set), I just went with Skull White --> Badab Black Wash --> Skull White.

Does anyone know of a quick way to paint smooth looking whites? Any suggestions are most appreciated. At least I have three more Termies to practise on before I attempt to paint the Ultramarine Terminator Sergeant.

Other progress on the AoBR set included assembly and undercoating of the vehicles i.e. the Ork Deffkopters and an Ultramarine Dreadnought.


Book of the Week - The Red King
Taking a short break from Black Library books to indulge in some Star Trek sci-fi stuff I have had in my collection for a long time. 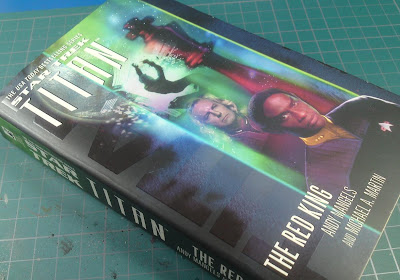 At the moment, I am trying to reconnect to the Star Trek reading materials by jumping in to the series in a chronological order. At the moment, I am at Star Trek Titan - The Red King by Andy Mangels and Michael A. Martin. I am a fan of the authors' earlier work i.e. Star Trek Excelsior:Forged in Fire.

As always, thank you for reading and have yourself a good week.
Posted by FourEyedMonster at 12:06 6 comments: